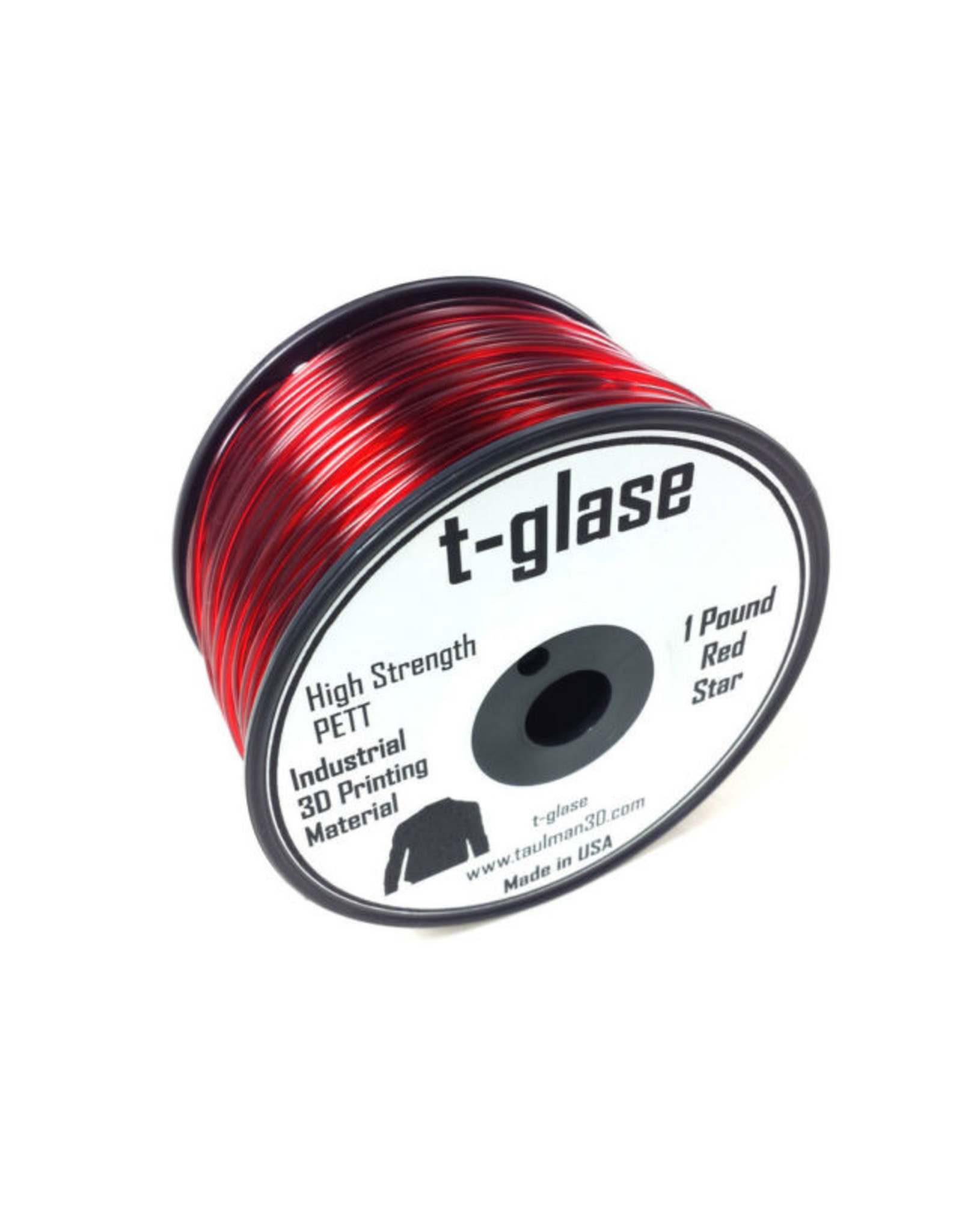 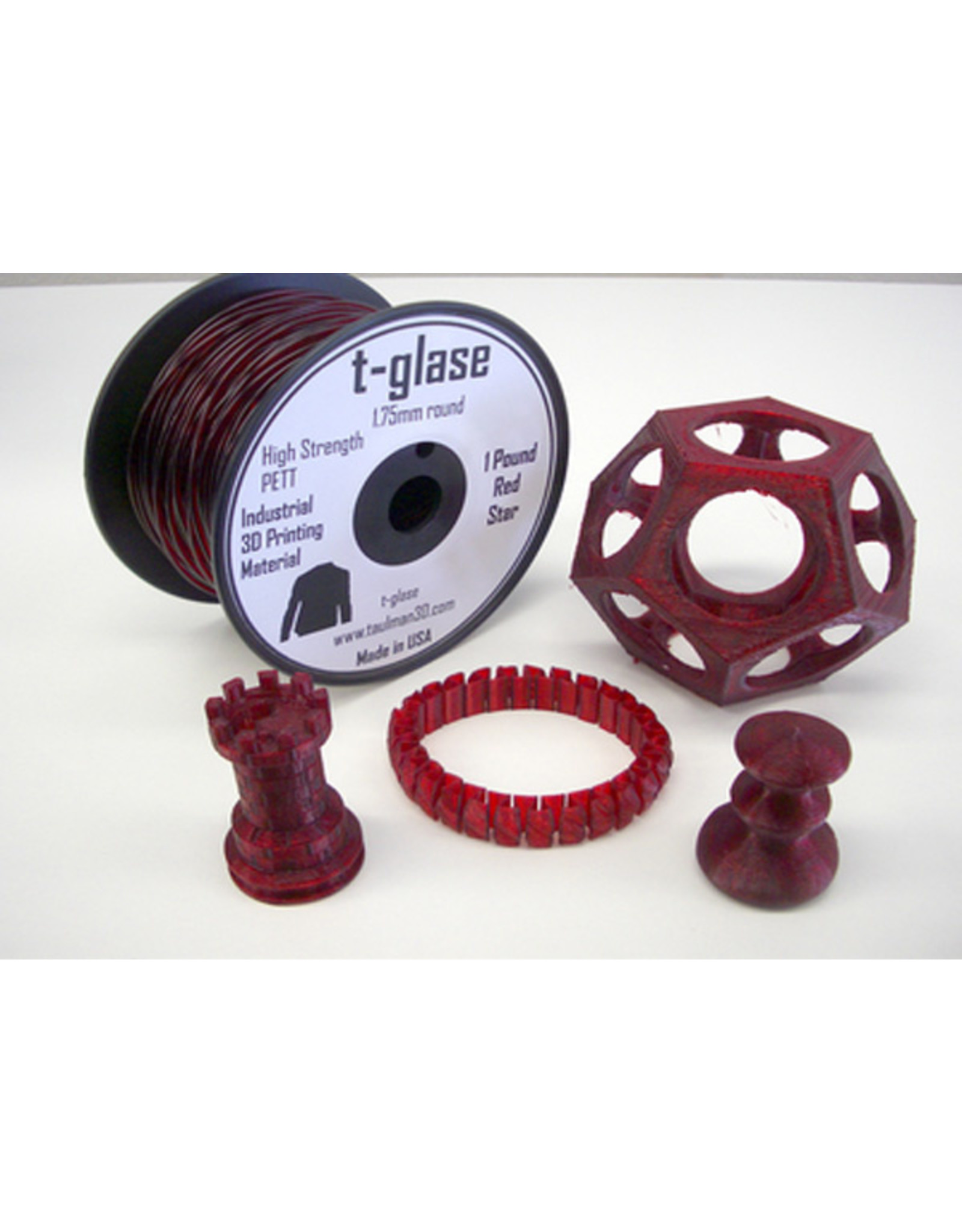 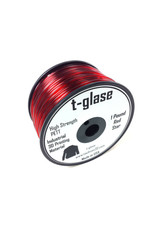 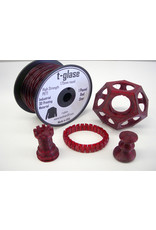 The main features of t-glase

Strength - Specifications on the strength of t-glase will be posted as soon as the data is returned from the test labs. We have started using a local test lab along with the lab's at a few universities to accumulate data. The process involves printing several "test bars" These are bars printed at 5" x .5" x .25". The setup for printing these is 1 perimeter and 100% solid layers.

Temperature - Optimum temperature is about 212c to 224C, but will print down to 207C and up to about 235C.
NOTE: A feature of t-glase was to select a polymer that easily sticks to heated acrylic and glass print tables for the smoothest bottom surface possible. While t-glase meets this requirement, it results in a low glass transition temperature. The effects of a low TG is that parts printed in t-glase, should not be exposed to high temperature use or applications. The measured TG of t-glase is 78C.

FDA approved – t-glase is specifically made of FDA approved polymers for direct food contact/containers. This includes cups and other liquid storage parts as well as utensils. We are working with the chemical company to provide you with FDA related documentation so you may sell your printed parts that meet FDA requirements. These documents will be posted below when available.

Environmental - While t-glase is not biodegradable like PLA, it is a material that’s considered 100% reclaimable. Thus the new “struders” that convert failed prints back to usable line work perfectly with t-glase. If you have a “struder”, you can actually mix in 12% of the total weight in discarded clear water bottles. Please keep in mind, that the polymer used in most water bottles, has a slightly higher melt temp and that adding them to the mix, may increase print temp a few degrees.

Bridging - Those of us that have printed with acrylics and poly carbonates are always envious of their bridging capabilities due to glass temperature. And the new t-glase is very impressive at bridging.

Fumes - Unlike some lines, there are no odors or fumes when 3D Printing with t-glase.

t-glase is very strong, yet different from our nylons as it’s stiff, like PLA and ABS. And based on our first industrial trials, meets all the requirements for the three industrial customers that had an applicable need. To these customers, the clarity was a significant advantage for their quality control departments.

First, t-glase is made from the highest optical quality PETT material and is currently only available from two chemical plants. Unlike other polymers, some PETT, including t-glase are not considered “transparent”. Instead, it belongs to a group of polymers that are considered “colorless” and or “colorless with a percentage of reflectivity”. t-glase is also considered “water-clear” and “optically correct”. The term “optically correct” simply means that if you have a lens based die and injection mold precision reflective PETT into the die, the resulting lens will be relatively close to the same lens made from glass. While there is no formal definition of “water-clear”, in optical engineering, it’s a reference to how high quality plate glass seems to disappear when placed in water. When a clean piece of high quality glass is placed in water, the water negates the flat surfaces as a reflective surface, thus making the major surface invisible. However, the edges of the plate glass will still redirect or reflect light in a different direction, thus making them viewable even in water. This water-clear property is why some of products we buy are displayed in “Blister-Pack” packaging. The material is based on PETT with processing that bring out it’s reflective properties and enhances the visual presentation of the product. Over and above the problems associated with removing said product from the packaging!

Hacking t-glase to look more like glass, from the Company that developed t-glase!

Having a background in large scale optics, we wanted to make sure that if there was a development for FFF printing of transparent parts, that t-glase would play a part as the base polymer.  During the development we made a decision to enhance the clarity of t-glase with a very slight trade off in the Tg in the final chemical formulation.  This has initially allowed some sites and designers to design jewelry components using a thicker layer during the printing process to give the part more of a glass like appearance.
It should be noted, that t-glase is a high strength PET polymer and prints with standard setting used for PLA but with a print temp of about 235C.  All of the cooling profiles and techniques used for PLA apply to tglase.  Large industrial users like AOSmith and others as well as hundreds of machine shops use t-glase for it's non delaminating feature when printing large parts.  However to gain an increase in transparently of the final part for esthetics, one needs to increase layer size and in doing so would need to slow the printer down based on the increased material flow.
We knew that a clear cylindrical thread laid down by most 3D Printers would result in zero depth-of-field, but this would eventually be an advantage if we could find a clear 2 part epoxy that could be painted/brushed on to the part to negate the shape of the thread, and convert the optical path to a "optical flat"   a fancy way of saying..."glass".
We have tried several clear epoxies since the release of t-glase and until now, all of the other epoxies had one of two issues.  1. A major requirement for a vacuum to eliminate bubbles and 2. lack of self settling or filling of gaps in the printed threads.
A company that specializes in 2 part artistic and industrial epoxies, "Smooth-On" released a product called "XTC-3D" for coating 3D Printed parts a few weeks ago.  We purchased the product and again performed some quick tests to determine if the product would fill the need to convert a cup from a cylinder of threads, to a clear glass.  The photos below show the results.  We are now suggesting the product to our users that need additional clarity in their printed parts.

Findings:
1. Dry time is correctly noted in the instructions.
2. XTC-3D dries to a hard and durable enamel type surface.
3. The number of coatings required was usually two.  A heavier coating may work, but more difficult to manage.  The red cup shows where a section has one coating and the lower section, two coatings.
4. While the material is an off-white when mixed, it does brush on an rather clear.  Again, the more brushed on layers, the more cloudy the surface becomes, but still acceptable.
5. While the material is self-leveling, we used a spinner to insure and even coat.  This keeps the material from over-settling, thus requiring more coats.  The spinner rotated at 100RPM to brush on the coatings and 40RPM during dry time so as to not let centrifugal force play a part. See additional note below.
6. The clear part shown is half coated to allow one to see the difference.
7. Most important to us was the lack of bubbles fond in almost all other 2 part epoxies we tried.  This was very impressive.
8. This works on t-glase as t-glase is very chemical resistant to the base chemicals in XTC-3D.  We tried this on clear PLA and clear ABS with very cloudy results.  The chemical base to XTC may be designed to fuse with ABS to increase overall strength or appearance.
NOTE: We are not affiliated in any way with Smooth-On.
Future efforts:
We are currently very involved in finalizing and releasing 3 new 3D Printing materials so we would encourage those interested to contribute to the hack.
A quick note as to optics or making lenses:  We ran a quick test and determined it is now possible to print plano and other lens types.  None are currently good enough in our first test, but here is what we've learned:
1. Larger threads are better..i.e. a .5mm.
2. The part should be sliced as "vase mode" at 0% fill.  2 bottom layer, no top layer.
3. The KEY is "thin layers"   .18mm is best.

NOTE = Spinner - Again, the XTC has a great "self leveling" feature, but as a fluid, it will run.  As our test part was a vase, we decided to rotate the part in real time as it dried and during the brush-on.  We used a standard elec drill and placed a round sanding mat with built in arbor into the chuck.  Electric drills, and many other electric tools use a motor called a "Universal Motor"  that will run on AC or DC, and we simply used a DC power supply to control the speed of the drill.  The speed will vary as to applied voltage, but 6-12 volts DC will run the drill rather slow.  We did measure the RPM's used and they are noted above.  We then simply used some double sided carpet tape to adhere the cup to the center of the sanding pad.  At 100RPM, we dabbed some material inside the cup first in a few spots, then used the rotation to even out the material.  Then, we did the outside in the same manner.  Once you're sure the outside is OK, but still see unfilled sections, they will appear layered, and that's where you need to re-spread on the inside.

Then we set for about 40RPM and let the drying process complete.  Within a few hours, you will be able to re-coat and as you do so, you will see the cup getting more clear or less of a threaded look. 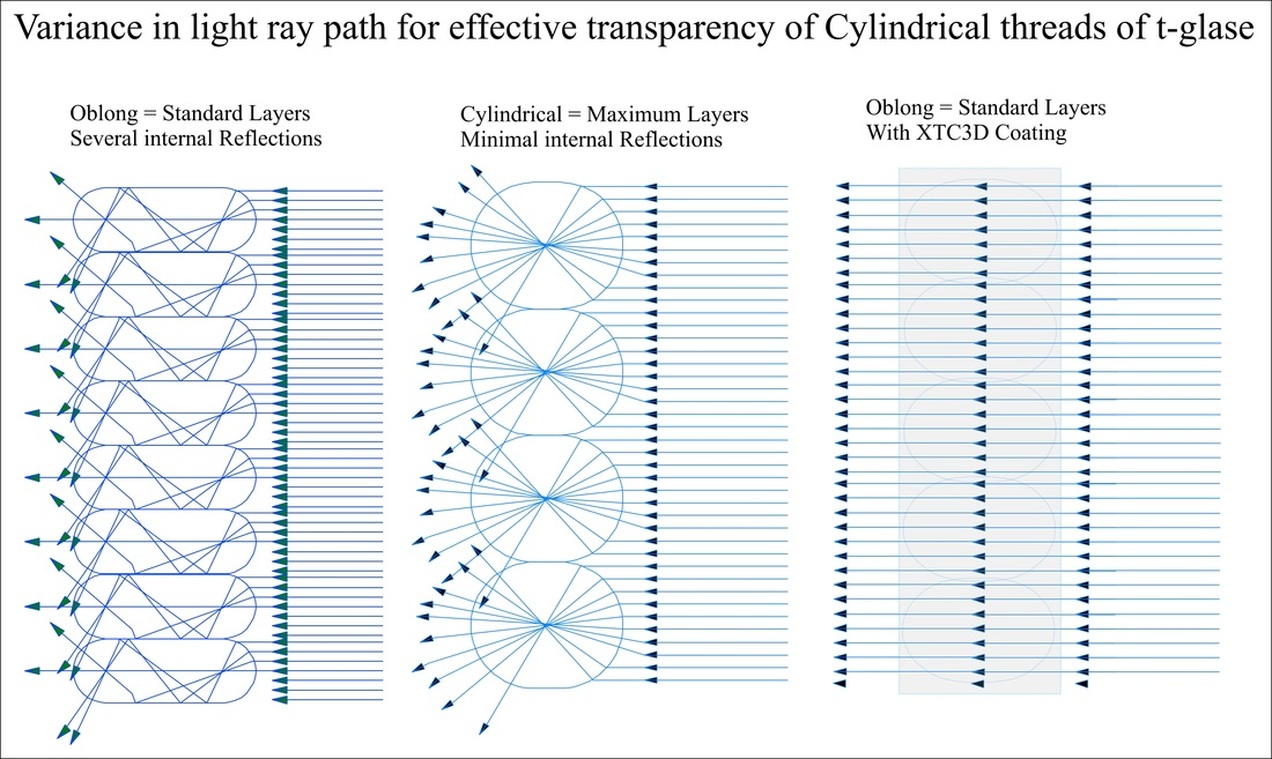 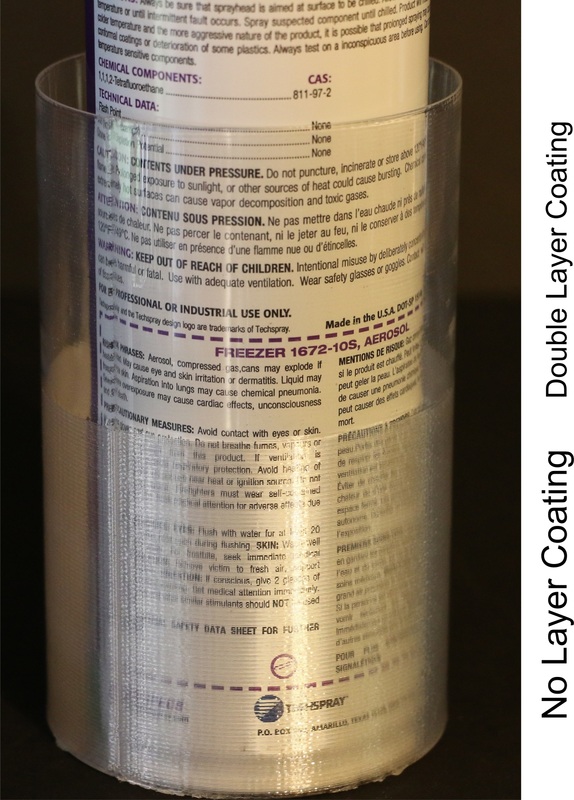 A can of Freeze spray inside the clear cup. 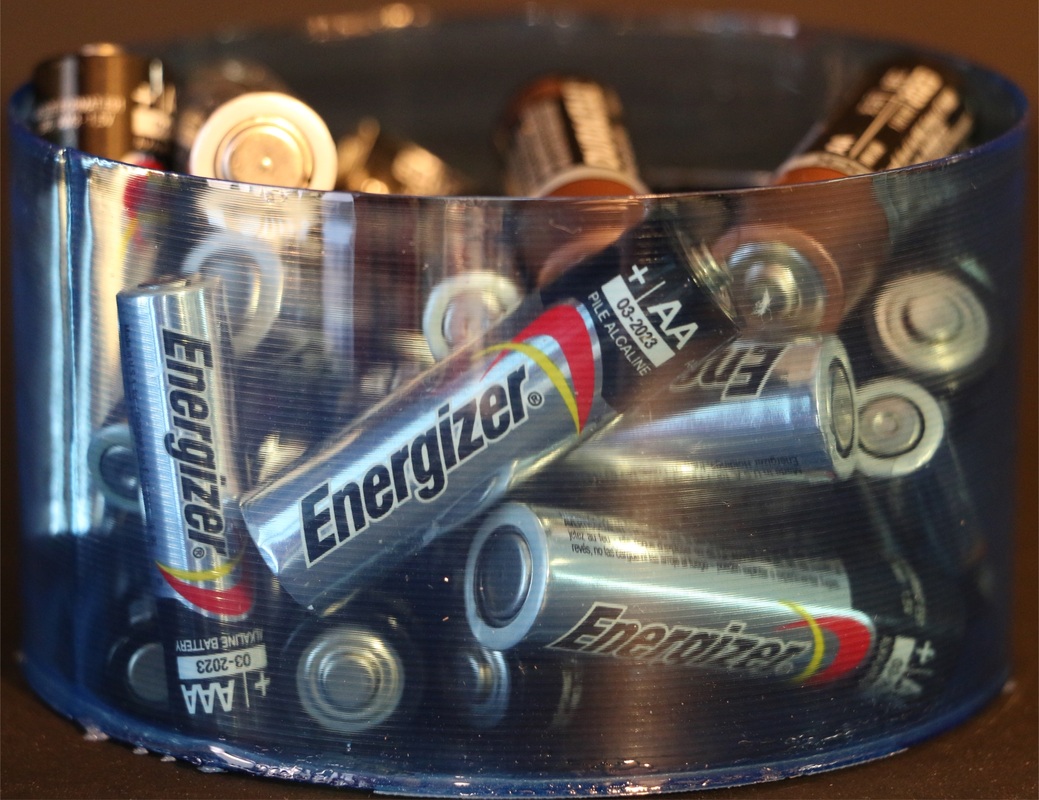 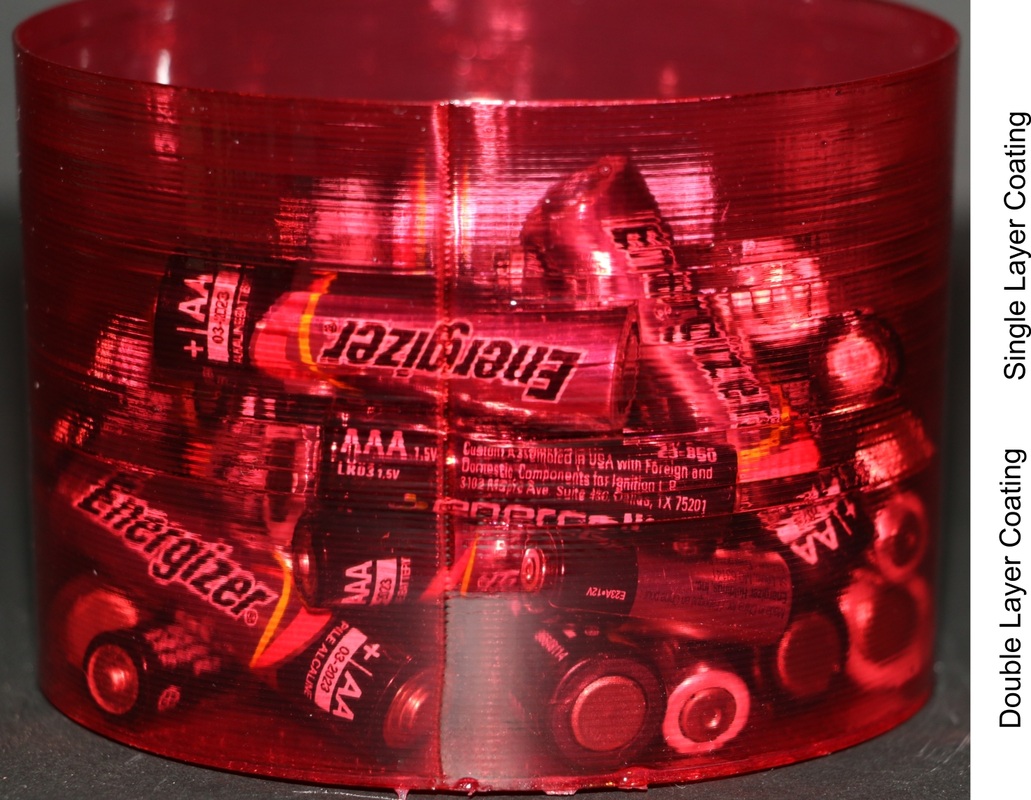 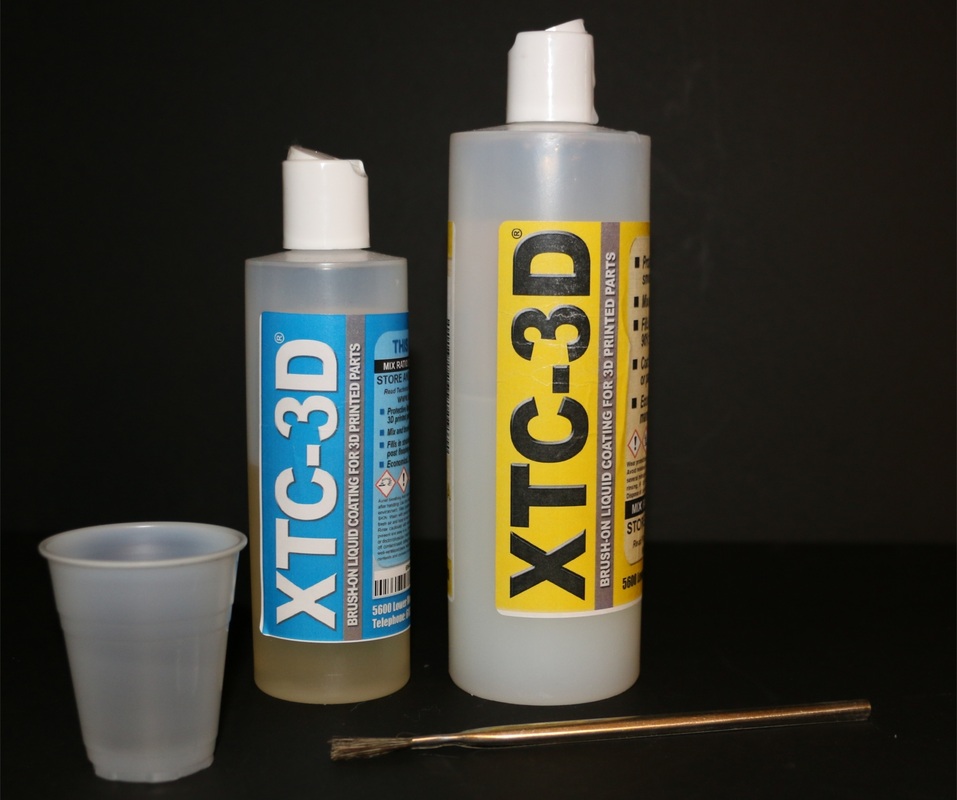 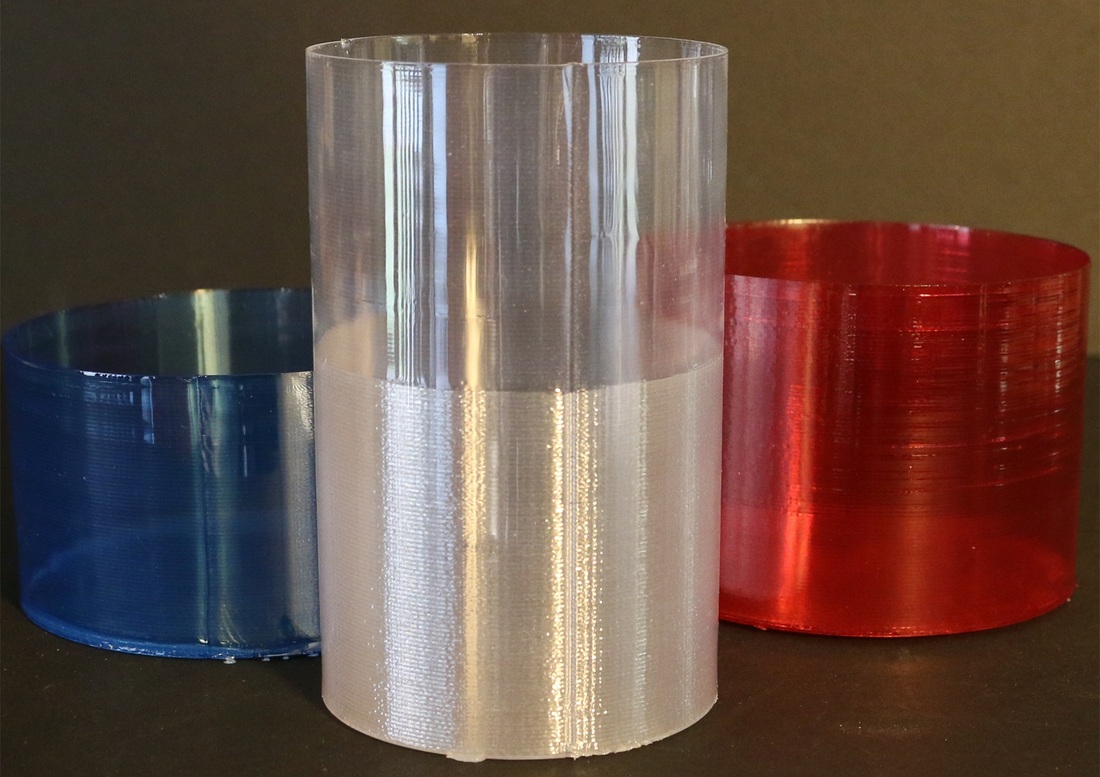 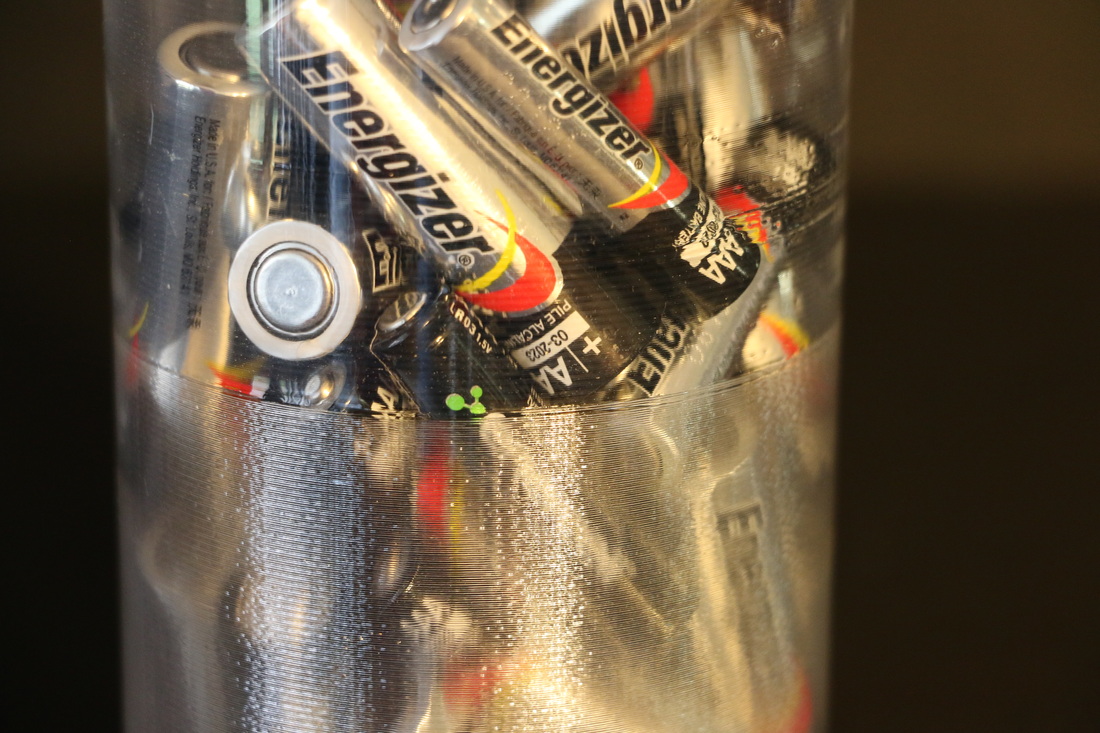 Add your review
0 stars based on 0 reviews
petg / 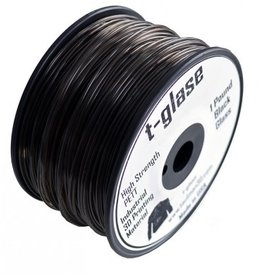 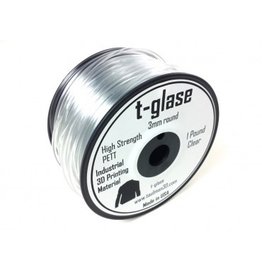 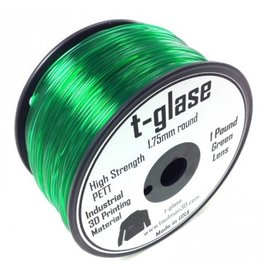 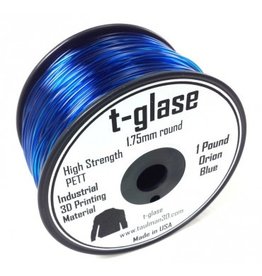 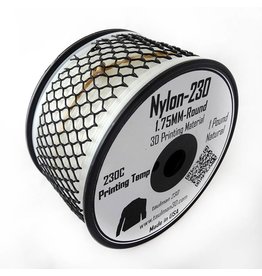 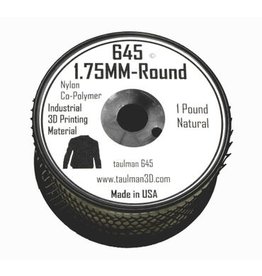 This is an exceptionally strong and durable formulation of Nylon which has been specifically created and tested for use in 3D printing
Add to cart
Taulman Nylon 645 - 1.75mm
€30,00 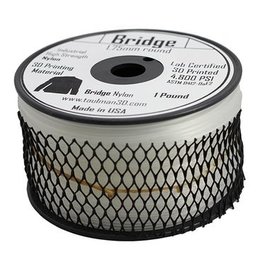 Taulman Bridge is an innovative nylon 3D filament which bridges the strength of nylon 645 together with the price of current ABS and PLA thermoplastics
Add to cart
Taulman Bridge Nylon 1,75mm
€23,00
Please accept cookies to help us improve this website Is this OK? Yes No More on cookies »